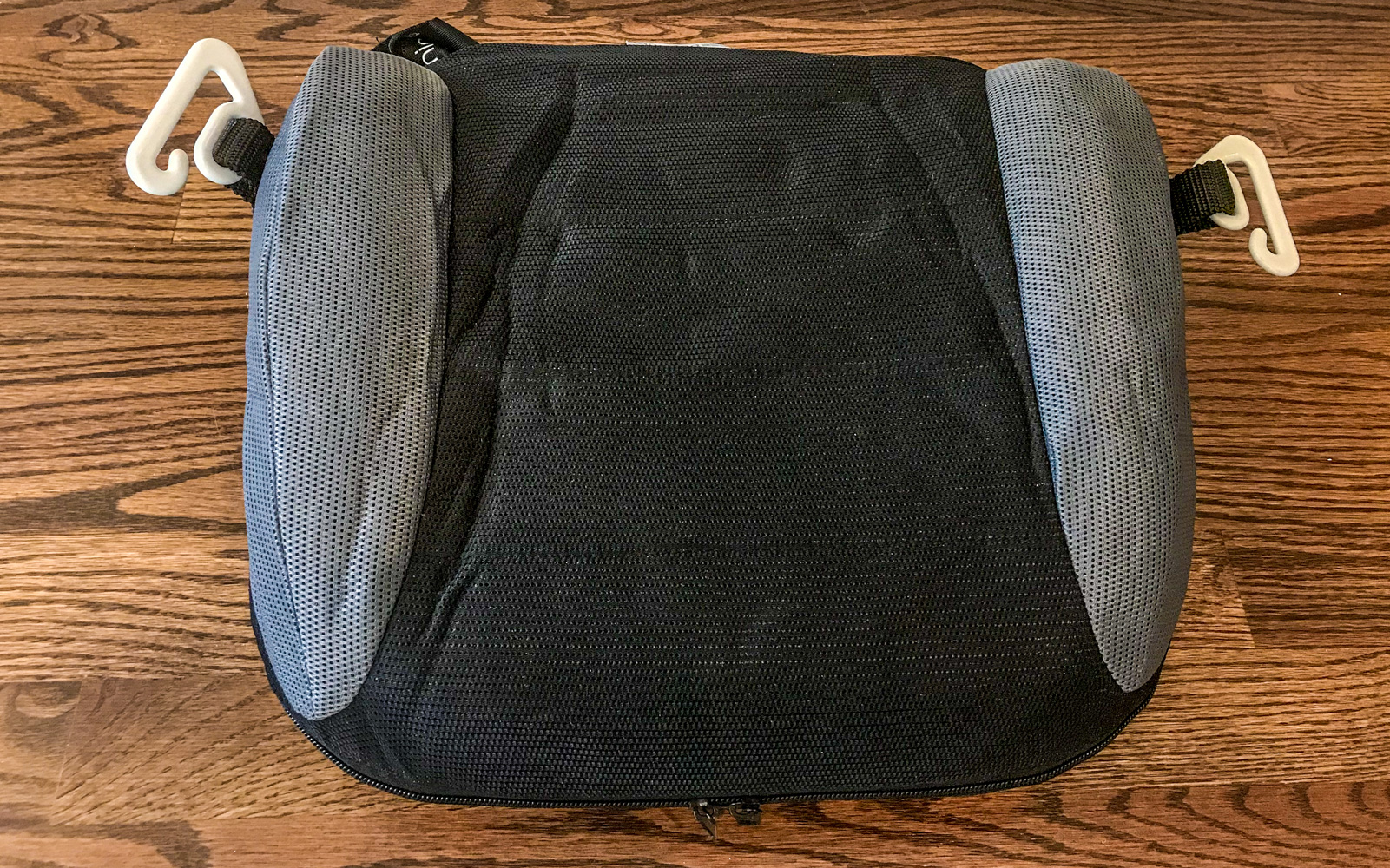 Traveling with kids gets so much easier when they’re old enough and mature enough for a portable booster seat! Our kids keep growing so we keep looking for new options to keep them safe on the go.

If you’ve been curious about the new inflatable booster seat on the block, here’s your chance to read our in-depth hiccapop UberBoost review. You’ll find out what it is, who it’s for and my honest pros and cons to help you decide if it’s right for your family.

What is the hiccapop UberBoost?

Like the Bubblebum before it, the hiccapop UberBoost is an inflatable booster seat. It’s constructed from heavy-duty vinyl that hiccapop has used to make other inflatable products (like this) for many years. The webbing for the lap belt guides is securely bonded to the bladder.

It weighs well under 2 pounds and rolls up small, but when you’re ready to use it it’s easy to inflate and becomes roughly the size of a traditional booster seat.

The UberBoost comes with a very compact carry bag, an option shoulder belt adjuster (more on that later) and a few patches in case your booster seat springs a leak – though hopefully it won’t. It also comes with an instruction manual and the booster seat itself has all the standard labels you’d expect to find on a booster seat.

As with all booster seats, you can’t use it on an airplane. But the UberBoost packs up so well that it’s easy to tuck in a carry-on backpack.

Who is the hiccapop inflatable booster seat for?

The hiccapop UberBoost is appropriate for kids who meet its size requirements (40-110lbs, 38-62” though the label is the only place I saw the height range listed) and are mature enough to sit properly 100% of the time. Most kids can’t reliably do that until at least 5 years old… but some kids can’t handle the responsibility until they’re 6 or even 7 years old.

Many young kids still need the support of a highback booster (or a harnessed car seat) to sit properly 100% of the time. A highback booster is generally more comfortable for them as well. If you want a folding highback booster for your 5 or 6 year old, definitely consider the hifold – you can read my in-depth review here.

The hiccapop UberBoost is better suited to kids on the older end of the booster age range in my opinion. Unlike the Bubblebum and the Graco Turbo GO, the UberBoost uses a huge latching plastic clip for the shoulder belt adjuster. While that clip works, my older child found it extremely uncomfortable since it sometimes dug into his body. At 48”, he needed the clip to get a proper fit in the center of our Honda CR-V with its ceiling-mounted seat belt. He could almost use the UberBoost outboard without the clip but not quite.

My 6yo 43” daughter needed the clip in all seating positions. She claimed not to mind it, but she doesn’t usually get to ride in a booster seat (and never backless) so it’s possible she might have said anything so that I’d let her ride in it. Which I won’t, not yet, because she’s way too sleepy and slouchy on rides longer than a few minutes. The lap belt fit was very good on her, sitting straight and flat across the tops of her thighs.

How to use the hiccapop booster seat

The hiccapop UberBoost inflatable booster car seat is very easy to use. Just follow these steps to get started.

Setting up the hiccapop UberBoost

Just unzip the cover and give a few hefty breaths into the black air valve to blow up the booster seat. There’s a flap in the valve that self-seals between breaths, so you don’t have to worry about air escaping before you seal it off. Since the UberBoost is empty inside (versus the foam inside the Bubblebum) you do want to make sure to get it filled well. I have some concerns that the valve inside may not seal as well after numerous years and lots of temperature changes and transportation, but hiccapop provides a reassuring lifetime warranty.

Once you’ve inflated the booster seat push the attached cap back into the valve and zip the cover. You’re almost done!

Securing your child on the hiccapop UberBoost inflatable car seat

Backless booster seats don’t require much set up in general, and the hiccapop Uber Boost is no different. If you do anticipate needing the shoulder belt adjuster, attach its strap to the loop on the “shoulder side” on the bottom of the booster seat cover before putting the booster seat in the car.

Place the booster seat in the car and have your child sit on it. Fasten the seatbelt with the lap portion of the seatbelt running through the white belt guides on each side. The lap belt should lay flat across the tops of your child’s thighs. If the shoulder belt is cutting into your child’s neck or “hovering” in front of her, you can use the while shoulder belt adjuster clip to bring it down to the right level. Remember, you want the shoulder belt to cross roughly at the middle of the collar bone with firm contact.

As with the Bubblebum, you can leave the seatbelt threaded through one lap belt guide and the shoulder belt guide if your child will keep using the seat in the same spot. No need to reset it every time! Just teach him to unbuckle and unthread the buckle side only.

Packing up the hiccapop UberBoost

When you want to take the Uberboost on the go, it’s extremely easy to pack up. Unclip the shoulder belt adjuster from the seatbelt if you’re using it, unthread the lap belt and remove the UberBoost from your car. After you unzip the cover, push gently on the flap in the valve to release the air. It won’t deflate on its own (thankfully).

I like to start rolling the UberBoost from the side away from the valve. That makes it easy to release the last little bit of air and roll it tightly. Since there’s no structure inside the UberBoost, it does collapse into an extremely portable little package! It’s easy to slip into the included carry bag, which you can put inside your child’s school backpack or attach to the locker loop with a carabiner.

So what was my final review of the hiccapop UberBoost? #itscomplicated

We didn’t love it for our family right now – but that doesn’t mean it won’t be great for yours. We currently have five other backless booster seats in our home and the hiccapop UberBoost just didn’t make the cut for us.

Here are pros and cons to consider:

The hiccapop UberBoost inflatable booster seat has a lot going for it. For our family, the shoulder belt clip really made it a non-starter for now. Our older child uses either the Bubblebum or the Graco Turbo GO for travel and backup, and he absolutely couldn’t stand the clip but is too short to get a good fit without it in most seating positions. Our younger child didn’t mind the clip, but as a 6 year old car sleeper she’s still a better off in the Ride Safer Travel Vest (full review here).

I also hesitate a little bit simply due to the “newness” of the UberBoost. While the manufacturer self-certifies that it has passed required Federal testing at an approved independent lab, there hasn’t yet been much outside evaluation. I did note that the required labels are present but not visible when the seat is installed – a technical deviation, but perhaps a variance that was approved by the NHTSA.

Strangely I couldn’t find any indication of an expiration date. If there isn’t one, I would prefer to see that specifically noted somewhere for caregivers. But given the vinyl that’s used for the hiccapop booster seat, it’s hard to see that it would be usable beyond ten years (the maximum stated expiration date of any car seat on the market).

All that said, I’ll probably keep the hiccapop UberBoost. The price point is very affordable and it should be a good backup option to keep in the trunk when we have average size 8 and 9 year old friends along for the ride. It’ll be easier to fit in a 3-across situation than our day-to-day booster seats.

The most natural comparison is between the hiccapop Uberboost and the Bubblebum inflatable booster seat. They work off the same concept and function similarly.

What’s the difference? The Uberboost packs down smaller but blows up bigger! Really the difference in deflated size is pretty small – they’re both much smaller than a traditional backless booster seat.

The Bubblebum is better for tight three-across situations, but it also offers a slightly smaller seating area for bigger kids. We also have an easier time adjusting the shoulder belt fit for small kids on the Bubblebum.

Some kids feel like the Bubblebum slips around too easily and (especially when over-inflated) feels a little unstable to sit on. On the other hand, the hiccapop Uberboost stays put thanks to its grippy backing; the seating area also has nice side bolsters and a firm section in the middle, giving it a feel that’s more similar to a traditional booster seat.

The Graco Turbo GO and hiccapop Uberboost offer similar seating areas, so they’re both good choices for older booster riders. The Turbo GO folds in half but is still mostly made of rigid plastic, so it’s heavier and larger than the Uberboost for transportation.

The Turbo GO gets the nod for ease of use if you’re looking for a booster seat for carpools that your child can set up herself. Just unfold it and place it on the vehicle seat. The belt guides are big and easy to use. It also has a simpler (and easier) shoulder belt adjuster.

Where to buy the hiccapop UberBoost

The MSRP of the hiccapop UberBoost is $34.99. You can currently buy it at Amazon.