Today’s topic is one that’s hard for me to write about: how to travel with car seats in the developing world, where some times even our North American CPST version of “bad” is another locality’s “best”. Nothing you’ll read in this article reflects judgement on families living in the developing world and doing their best with the limited options available, but rather that parents who are privileged enough to travel the world with their kids must also take responsibility for keeping them safe.

The good news is that you’re here reading because you’re open to learning what you can about traveling with car seats in the developing world before you go explore. I’ll be honest and say that during a year of full-time travel with our children, we found ourselves in some sticky situations. Several of them made me extremely uncomfortable and I wouldn’t choose to do things the same way. But we also learned a lot along the way about how to decrease risks where possible.

Thanks for reading with an open mind, and as always please feel free to drop any questions in a comment below.

Want to know all my best secrets? Click here to learn how to travel with your car seat like a pro!

“When in Rome…” carries risks

First it’s important to understand that car crashes are a major risk everywhere. You could be in a terrible crash just a block from home (as my kids were) or half a world away.

But often in family travel groups on Facebooks (at least the poorly-moderated ones) you’ll see many affluent parents shrug off these concerns by casually mentioning that entire families cram onto motorcycles in Vietnam or that mothers rural South America carry babies in their laps or that African children ride in the backs of pickup trucks.

These things are all true, but it’s also true that road traffic injuries are the leading cause of death for ages 5-29 around the world. And road traffic deaths have been steady or increasing in low-income countries around the world in the last decade. In the graph below from the 2018 WHO report, you can see that regions like Africa and South East Asia are much riskier for everyone on the road – drivers, cyclists, pedestrians. (If some of the regions or their data leave you scratching your head, you can see them here)

So while it’s true that people in many low-income/developing countries transport their children in ways we would never consider in North America or Western/Central Europe, that doesn’t make them objectively safe choices.

Knowledge is power. The best thing you can do before a trip anywhere outside your home country is research what kinds of vehicles you’re likely to encounter, and that’s even more important when traveling in the developing world with kids. TripAdvisor forums are particularly good for that information, and in some cases I’ve covered specific countries here with the aim to add more over time.

The most basic thing you’ll want to find out is whether or not cars in your destination typically have seatbelts. The vast majority of countries require seatbelt usage for all occupants in principle, but on the ground you may not always find them. Sometimes they’re covered up or hidden and you need to ask for them to be made available (because often locals don’t), sometimes cars don’t come with them, and sometimes they’ve been removed rather than repaired if they malfunction.

Thankfully there’s a good bit of news on that front. In many (not all) countries, the issue of missing seatbelts is much more of a factor in taxis and other forms of transportation than it is in rental cars or car services. Morocco is a great example of this: neither grand nor petit taxis typically have seatbelts, but the affordable private driver we used several times had a swanky Mercedes van with European-style safety features. We also skirted the issue (as much as possible) with planes, trains, buses and our own feet. Had we rented a car from an international company, I’m confident that it would have come with seatbelts.

If seatbelts aren’t commonplace in taxis, research other ways to get around. Often a private driver is very reasonably priced. A fantastic benefit of going that route if your child is still in a car seat is that you can usually leave it installed for the few days that the driver is taking your family around. No worries about having to install quickly under the pressuring eye of an impatient taxi driver who may not think car seat usage is important.

Another piece to look for (but you may not be able to decipher in advance) are vehicle head restraints. They prevent whiplash in tweens, teens and adults. You can generally count on head rests for the front seats and sometimes for the windows seats in the back (though they may be really short integrated pieces that don’t do much good). Unfortunately in many cases you won’t find one at all in the middle seat, and that spot is nearly always equipped with just a lap belt.

It’s also important to reach out directly to any transfer services and tour companies you plan to use in advance to find out what their vehicles are like. Before our recent trip to Mexico, I picked up the phone and called the shuttle company specifically to ask – and they were happy to answer my questions!

Rear face to the max

In North America and Europe, we encourage parents to rear face to the maximum limits of their seats. We make that recommendation even in the context of options like a forward-facing harnessed seat that’s installed with a lap-shoulder belt and top tether.

If you are fortunate enough to find seatbelts in a vehicle in the developing world, there’s a very good chance it will be a lap-only seatbelt. Again, renting a car gives you a better shot at having a lap-shoulder belt. I wouldn’t expect a top tether even in a rental car, but you can be pleasantly surprised if you find one.

The problem with lap-only seatbelts (officially called “type 1” in the US) is that they aren’t nearly as safe for anyone except kids riding in rear facing car seats. In frontal crashes, back seat fatalities are 25% lower with a lap-shoulder belt than a lap-only belt.

Many parent opt to forward face their 2-5 year old children, especially when traveling. All harnessed car seats in the US must pass testing with a lap belt alone, but that doesn’t mean the seat will perform the same as it would with a seatbelt + top tether. We know that the top tether decreases forward head movement by 4-6″ in a crash, and that can make the difference between your child’s head striking the seat in front of her and sustaining serious injury… or walking away unharmed. Rear facing is significantly safer than forward facing without a tether.

The situation becomes even worse when you consider booster-age kids (particularly since some parents switch to a booster at 4, which is too young). Booster seats don’t work with lap-only seatbelts at all. But putting a child whose body is still small and developing in a lap belt with nothing else puts them at major risk for “seatbelt syndrome“, while leaving them unrestrained risks ejection and death. Not great choices, eh?

Impractical as it may sound, rear facing in these situations is even more important than it is at home. For kids who are small enough, an infant car seat or the Cosco Scenera Next is ideal. The Graco Contender will keep kids rear facing all the way to 40lbs even if they’re tall as there’s no standing height limit, and it weighs just 14lbs. If you’re traveling with a heavier child and want to continue rear facing until 50lbs you’ll need to bump up to the Graco Extend2Fit, which weighs 18lbs.

The next best option is to use a forward-facing car seat even though its protection isn’t as good without the top tether. For kids up to 50lbs or 50″, consider the Evenflo Maestro Sport (though Evenflo officially requires a top tether now). For kids up to 65lbs or 49″, go with the Graco Tranzitions.

As I mentioned above, life gets more complicated if you’re stuck with a lap-only seatbelt for a child who has outgrown all those options but still has immature child hip bones (which can be the case into the early teens). One (thoroughly unapproved) option to position the lap belt low enough to avoid seatbelt syndrome is the large WhizRider vest – full review coming soon. It’s inspired by and structured like a climbing harness and has seatbelt guides that will keep the lap belt on the tops of the thighs. The large vest is rated for 47-57″ and 47-80lbs, so this is really for the biggest of kids. This is, as my fellow CPST (and fellow Melissa) put it, the “not -the-worst” option.

In case you do wind up with an American-style lap-shoulder seatbelt with a sliding buckle, you’ll need a way to lock it to install a car seat. The solution is a locking clip, which is a credit card sized piece of steel designed to fix the length of the lap portion of the seatbelt. You can read all about it here.

Some seats come with a locking clip, but these days many do not. You can probably get one for free from your car seat’s manufacturer, but if you don’t want to wait or they’re giving you a hard time, drop a few dollars and get one here.

A locking clip is not intuitive and you can’t just wing it. Be sure to learn how to use a locking clip.

Of course before battling with the locking clip in a particular car, be sure to test the seatbelt to see if you can lock it by pulling the shoulder belt all the way out and letting it retract while you hear the click-click-click. If that’s an option, by all means feel free to do it.

The issues outlines above aren’t always an all-or-nothing situation thankfully, and sometimes thoughtfully configuring everyone in a vehicle can make everyone safer.

For example, a taxi sedan might have lap-shoulder belts and head rests in the window seats and a lap-only seatbelt with no headrest in the center. If you’re a family of four, ideally you’ll put a rear facing child in that center seat. The next best option would be to put a forward facing harnessed child in that center spot.

Public transportation is your friend

If your global adventures take you to a big city, make sure that public transportation is part of your research. Subways, trains and city buses are safe to use without car seats and completely avoid all of the issues discussed so far. They can also make you feel much more like a local! In most places, the Google Maps app gives reliable public transit directions but it’s always worth checking in advance.

It’s also worth noting here that options like tuk tuks may be fun and classic but aren’t safe. They wind through extremely congested roads with no seatbelts and no structure to protect you in a crash.

Having kids doesn’t mean you have to stop exploring the world, but it does mean that you’ll have to plan a little more in advance… and sometimes spend a little more money. Wishing you safe and amazing travels!

Check out these articles for more helpful tips: 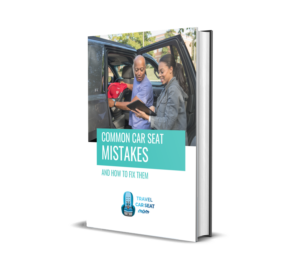